Grandpa is dying. He can barely move his hands any more but, stubborn as ever, refuses to stay in hospital. He’s determined to finish his last painting, ‘River Boy’, before he goes.

At first Jess can’t understand his refusal to let go, but then she too becomes involved in the mysterious painting. And when she meets the river boy himself, she finds she is suddenly caught up in a challenge of her own that she must complete – before it’s too late…

‘River Boy is a story that seemed to come in snatches of dream that initially made no sense to me. The title came first. It just popped into my mind. I had no idea what the words meant or what I was going to do with a river and a boy, but I had a picture of a young girl in my head, and an image of my paternal grandfather. He was a lovely old man who died when I was 14, nothing at all like the crusty old grandfather who appears in River Boy, though I grew very fond of him, too, by the end of the book. The girl was called Lucy in the first draft, then for some reason she became Jess. I had several false-starts with the writing, then one day my wife came home with a painting of a river and suddenly the grandfather in the story became an artist and I realised that the painting and the boy and the river were going to become spiritual metaphors and the book was going to be about life and death and love and hope.’ 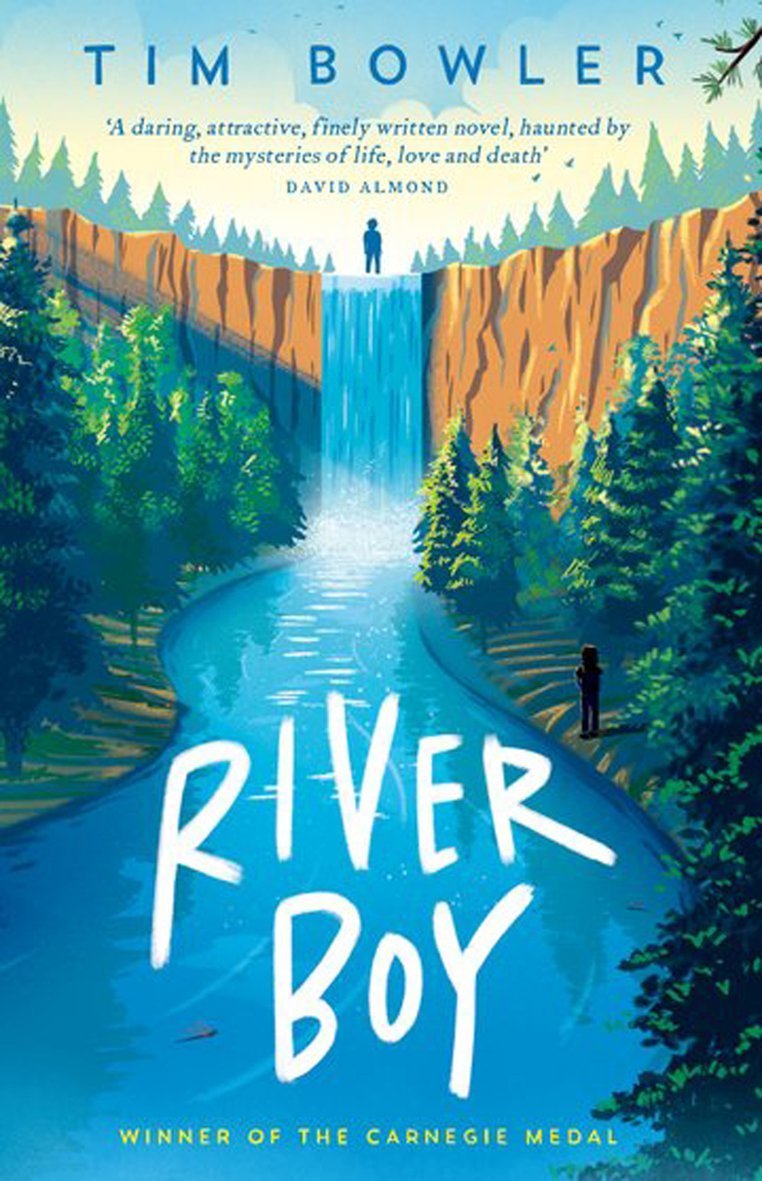 On 15 July 1998 James Naughtie announced that River Boy was the winner of the coveted Carnegie Medal. ‘This book is an antidote to the Cool Britannia culture of slick, superficial emotions,’ said Tricia Kings, Chair of The Library Association’s Youth Libraries Group panel of 13 children’s librarians, who selected the winner. ‘In describing Jess’s struggle to come to terms with the fact that her grandfather is dying, River Boy deals with one of life’s profoundest challenges – coping with the loss of someone you love. Thank God the next generation can draw on imaginative literature of this calibre in helping make sense of life – and death’.

The judges chose River Boy over two acclaimed prize-winning books on the shortlist of seven titles. ‘This extremely fine novel was a clear winner,’ Tricia Kings concluded. ‘It was not at all a compromise choice. River Boy has all the hallmarks of a classic – it deepens with re-reading, and takes the reader on a journey. You are not the same person at the end of this book’.

‘A river is a natural metaphor for life and death and Tim Bowler uses it to wonderful effect in this lovely simple story. River Boy is written in quiet, non-poetic prose – but it’s a poem, as well as a very moving novel.’
Susan Cooper

‘Beautifully written…it feels like a written painting, a descriptive, emotive work that will mean something different to each reader. This mystical story is a true work of literature.’
Voya

‘River Boy has all the hallmarks of a classic…You are not the same person at the end of this book.’
Carnegie Medal judges

‘The book is indeed a stunner – powerful, magical, unforgettable, a young classic of a book enjoying the first couple of years of what could and should be immortality.’
Evening Echo

‘Unflinchingly facing down the subject of death, Bowler elevates it into an elegiac, magical depiction of a granddaughter’s relationship with her grandfather.’
Scotland on Sunday

‘It’s an intense, mystic exploration of the relationship between a teenage girl and her irascible grandfather, an artist. Bowler’s writing creates indelible visual images and his characters are a refreshing change from the stereotypical problem children and single parents with which contemporary children’s literature is littered…engrossing.’
Time Out

‘The atmosphere is haunting, the sense of the power beyond ourselves, strong and silent, and the mystery of the natural world, woodlands and airy hills and sliding, glittering water are beautifully suggested, as is the strength – oh, subject most rare – of familial love.’
The Spectator

‘River Boy is strong on mood and atmosphere. It deals with death unpretentiously and unsentimentally, investigating the final stages with dignity and calm.’
The Guardian

‘A fine winner of this year’s Carnegie Medal – haunting, poetic and written with great feeling.’
The Mail on Sunday

‘Bowler’s sensitive but often dark tales have slowly built his standing, while this year’s Library Association Carnegie Medal for children’s fiction with River Boy has sealed his reputation as one of the best new children’s authors.’
Publishing News

‘A lyrical story of bereavement that manages not to be effete thanks to credible and courageous characters and a plot that involves mystery and tension.’
The Sunday Times

It didn’t start with the river boy. It started, as so many things started, with Grandpa, and with swimming. It was only later, when she came to think things over, that she realised that in a strange way the river boy had been part of her all along, like the figment of a dream.

And the dream was her life.

Half-past nine in the morning and the pool was crowded already. That was the down-side to summer holidays, especially hot ones like this, but she knew she shouldn’t grumble: she’d been here since six thirty, together with the usual hard-core of serious swimmers, and she’d managed a leisurely four miles without interruption.

But she did grumble; the mere sight of all these people flopping in like lemmings made her want to shout with frustration. She wasn’t ready to stop yet, not by a long way. She had energy left and she wanted to use it.

She stuck to her lane, doggedly ploughing length after length, trying to ignore the splash of other swimmers. Sometimes she’d found that if she just forced herself to keep on swimming, the other users of the pool seemed by some collective telepathy to accept that space as hers, and leave it to her. But that wouldn’t work today: they seemed to be jumping in by the score. Another quarter of an hour and it would be unbearable.

She locked into her stroke and drove herself on, her breath beating its practised rhythm in time with her strokes, as even as the chime of a clock. In for a gulp of oxygen, her mouth twisted upwards to snap its life from the air, then face down again and the long exhalation to a slow, steady count, bubbles teasing her lips like tiny fish.

She loved this rhythm; she needed it. It kept her thoughts on track when they started to wander. Sometimes, when things were going well and she was feeling secure in herself and had something pleasant to think about, she was happy to let them wander; but if she was tiring or feeling vulnerable or worrying about Grandpa again, she focused on that rhythm and it settled her, sometimes even when she wasn’t swimming.

But she was always swimming. She needed to swim. To be deprived of swimming would be like a perverse kind of drowning. She loved the sensation of power and speed, the feeling of glistening in a bed of foam, even the strange isolation of mind in this watery cocoon. Distance swimming was as much about will as about technique; and she knew she was strong in both. All she needed now, to set that will alight, was a big swimming challenge; something to test herself against. Something she could one day be proud of.

She heard Grandpa’s voice calling her.

She glanced up at him as she flashed by, and smiled to herself. She knew what ‘keep going’ meant. Dear old Grandpa: he’d only been here twenty minutes and he was bored already. He ought to know by now that he could never fool her, of all people. His concentration span had always been short, except when he was painting, and his temper shorter still. Yet for some reason he always liked to come and watch her swimming.

She reached the far end of the pool, turned and kicked off the wall, and looked for Grandpa again. He’d wandered round to the shallow end and was standing there, watching some children. He was ready to go; but maybe she could squeeze in a couple more lengths to finish off. She plunged down towards him, feeling for some reason slightly apprehensive. The children in the shallow end blocked her lane but they broke apart as she approached and she slipped in between them, wondering whether she should stop.

She kicked off the wall and headed back down the pool, suddenly desperately uneasy. Something was wrong but she couldn’t work out what it was. His words rang in her head: everything’s fine, everything’s fine. And yet there was something in the very contrariness of Grandpa that told her he was trying to conceal something. He was such a stubborn, prickly old man, he would always say everything was fine.

Especially when it wasn’t.

She broke out of her stroke and stopped, treading water, and searched for Grandpa. There he was, still standing by the shallow end, watching the children. He looked all right; no different from before. Just bored. Perhaps she was imagining all this. He saw her and raised a hand to wave.

Then, to her horror, clutched it over his heart and crashed into the pool.

River Boy can be ordered as a Kindle Edition, Audiobook, Hardcover, Paperback and Audio CD by clicking on the image below.